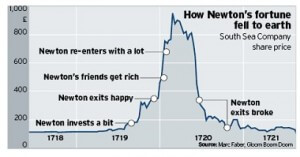 Sir Isaac Newton was one of the most influential scientists and thinkers of all-time. As a physicist he helped to define the law of gravity and the motions of planets and stars, and as a mathematician he invented calculus. Newton’s discoveries guided other scientists and mathematicians for hundreds of years. As you might imagine, Newton possessed END_OF_DOCUMENT_TOKEN_TO_BE_REPLACED