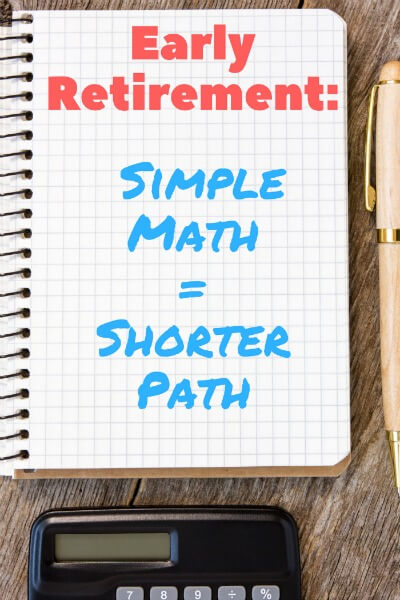 What matters is very personal to you. It can be high-minded, like starting a movement to change the world for the better. It can be epic, like traveling the world with your family.  Or it can be very simple and practical, like taking more time to work in your garden or to nurture your relationships with friends and family.

But instead of our true calling, too many of us spend our time grinding at a job “making a dying”.  Even jobs that began as interesting and fun can become drudgery when they’re done out of necessity for too long.

So, early retirement is a path to free yourself from your financial and mental shackles. And it’s a path for aspiring retirees of all ages, from the 25-year-old to the 60-year-old and beyond.

Amazingly enough, the math to reach early retirement is simple. But applying that math will require some effort and some uncommon thinking.

In the rest of this article, I’m going to share the simple math behind early retirement and give you some practical ideas that will help you improve the odds in your favor.

But first, a story.

The fall after I graduated from college I was trying to figure out what I wanted to do with my life.   I liked to learn, so I decided to take some classes at Clemson University for the fun of it. I learned about insects, the philosophy of science (yeah, I’m a nerd), accounting, finance, and business management.

All of the classes were worthwhile in some ways, but the business management class changed the course of my life.  The content was good, but it was the teacher that made the biggest impact.

The teacher, Louis Stone, eventually became my friend, mentor, and private investor in real estate. And soon after I met him he told me a story about a simple formula to build wealth quickly. The story stuck with me and gave me a basic formula for early retirement.

The Story of a Simple Path to Riches

When Louis was in his 20s, he met an older, wealthy gentleman while he was working in New York.  One day the old man asked him, “Louis, do you want to know how to become rich?”

Of course, Louis enthusiastically said yes. So did I when Louis asked me the same thing.

“Louis, if you keep doing that, you can’t help but become rich. And it will happen faster than you think.”

Louis’ old mentor was right. It worked for Louis. It’s also worked for me and countless others. An entire book called The Millionaire Next Door  shows example after example of millionaires who followed this simple path to wealth.

But behind this story is also an important, simple formula.

The Speed of Your Savings Rate

Pete over at mrmoneymustache.com retired at 30 years old after almost 10 years of work.  He’s also a smart and funny dude who writes about his story and the principles he has learned.  In The Shockingly Simple Math Behind Early Retirement, Pete shared that one factor more than any other allowed him to retire early. The key factor was this:

His savings rate,  or the percentage of his take home pay that he saved

In other words, the size of the gap between your earnings and your spending determines how long it’ll take you to become financially independent.  This gap allows you to save large amounts of money, which is the main point of the story above from Louis.

Of course, you also need to safely receive some sort of investment return on your savings.  But, when your goal is to retire early (as in 10-15 years or sooner), a high savings rate is the most important factor. Returns are still important, but they make a bigger impact over the long term.

Is it any wonder people are stressed about having enough money for retirement? The message is clear. If you want to be above average financially, focus on becoming above average with your savings rate.

This graph produced by the cool early retirement calculator at networthify.com shows the effect of various savings rates on the number of working years to retirement. The United States rate of 6% is on the far left at almost 60 years. More ambitious rates of 50%, for example, are in the middle at 17 years to retirement.

Here is another view of the results from this chart:

Do you know your savings rate? How much longer will it take you to retire based on these calculations?

And the variables of this math equation are also fairly simple.

But the trick is actually applying this math to your life.  I’ll explore several ways to do that in the following sections.

Earn More by Increasing Your Service

Wage stagnation is constantly in the news (in 2016).  You have little control over the average wages of the nation, but luckily you do have some control over your own wages.

To start, you can focus on increasing your level of service and value to others.  In “Service: A Simple Strategy to Make More Money (and Become Happier)” I shared a quote from Earl Nightingale and his classic Lead the Field:

Money can’t be sought directly. Money, like happiness is an effect, and the result of a cause. The cause is service.”

Extraordinary service makes you more valuable to your customers, to your company, and to your colleagues.  It’s about a commitment to help others, and it’s relevant to every profession.

Service is also about improving yourself. The valuable skills of today are not the same as yesterday.  If you want to remain personally marketable and relevant, you have to continuously grow, learn, and improve.

Earn More by Getting a Side Hustle

If your job income seems to be limited, you can also work on a side business (aka a side hustle).  Nick Loper, the creator of sidehustlenation.com begins each of his podcast episodes with:

In other words, people who retire early and achieve financial independence don’t sit around eating Cheetos and watching TV after work. Instead, they HUSTLE!

One of my favorite side hustles in the real estate world is a live-in flip.  You have to live somewhere, so buying a house below value, fixing it up, and selling it for a large tax-free profit can boost your earnings in a big way.

My friend Carl in Colorado wrote a post about how he and his wife used live-in flips to accelerate their path to early retirement.  A large chunk of their net worth can be traced back to this single side hustle.

But real estate investing isn’t the only option for a side hustle.  There are an enormous number of opportunities that can generate extra income. You just need to find something that matches your interests and your skills.

If you’re interested, I recommend that you read through Nick Loper’s list of 99 Side Hustle Business Ideas You Can Start Today.  Find one that resonates with you and seems to be an opportunity, and then just give it a try.

You can look at your personal expenses like money leaking from a bucket.  Each month you fill up the bucket with your income, and each month the money runs out of the bucket through the holes in the bottom.

You have hundreds of different holes in the bucket.  So, which ones should you focus on first? Answer: the BIGGEST.

I wrote about How to Get Rich With Embarrassing Old Cars and Ugly Houses.  The main point was that housing and cars are two of the biggest holes in your monthly budget.  When you focus and reduce these expenses, you get the highest return on your efforts.

Because your housing costs even more than your car, it makes an even bigger difference in your early retirement plans.

If you value the expensive car and house more than the enormous future cost, by all means, purchase them.  There is nothing inherently wrong with that. But, if you value your freedom and early retirement more than those things, you’ll do well to shop carefully for your car and housing purchases.

At its best money really indicates our priorities and values.  We all value different things, which makes life more interesting, doesn’t it?

But I wrote this article for those of you who value freedom and independence more than stuff.  Early retirement is a way to put that concept into a goal. That doesn’t make stuff bad.  It simply acknowledges that too much stuff has an unacceptable cost.

Fellow blogger and real estate investor Paula Pant explains this beautifully with her website motto: “you can afford anything, but you can’t afford everything.”

You can’t have it all. You have to choose. And your choices begin today.

Is early retirement a worthwhile priority? What is the hardest part about the “simple” math for you? Is earning more or spending less higher on your priority list?

Please leave your comments below.

11 shares
Get a Quote for an Investment Property Mortgage